We use the web analytics platform Matomo to carry out statistical analysis and to optimise our website. If you provide your consent, we will record your browsing activities on our website and we will access technical data about your device, strictly for the above-mentioned purposes. You can revoke your consent at any time with future effect on our Privacy policy page.

Heavily indebted countries in financial distress require efficient solutions that are coordinated at the international level. To this end, in 2020 the G20 adopted the Common Framework for Debt Treatments, which aims to put an effective and sustainable debt treatment scheme in place. The Common Framework makes it possible to coordinate and implement customised debt restructuring plans on a case-by-case basis that can also include debt cancellation.

“The Common Framework needs to become a real set of rules that prevents countries – and their populations – from falling into financial distress, especially in times of financial instability.” Christian Lindner, Federal Minister of Finance

According to the International Monetary Fund, the percentage of low-income countries that are at risk of – or are already in – debt distress has doubled to roughly 60% since 2015. Despite receiving significant levels of assistance, many low-income developing countries are being hit particularly hard by rising food and fertiliser prices following Russia’s invasion of Ukraine and by the wide-ranging and ongoing consequences of the Covid-19 pandemic. 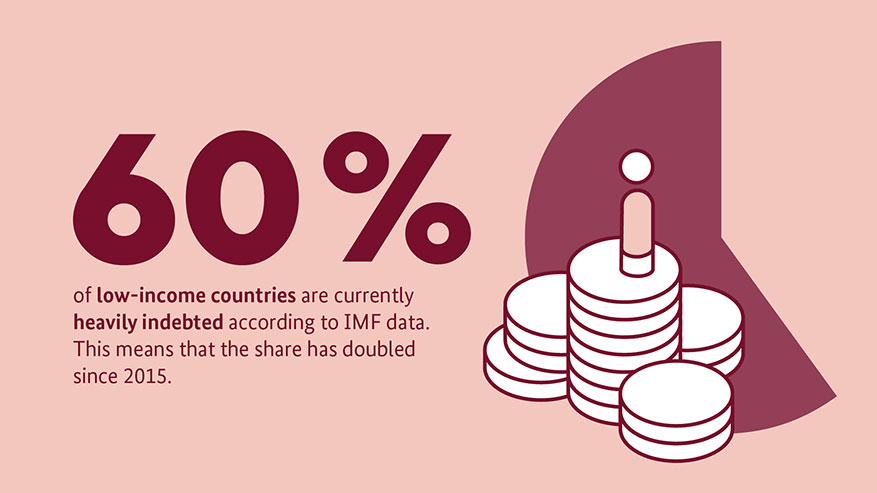 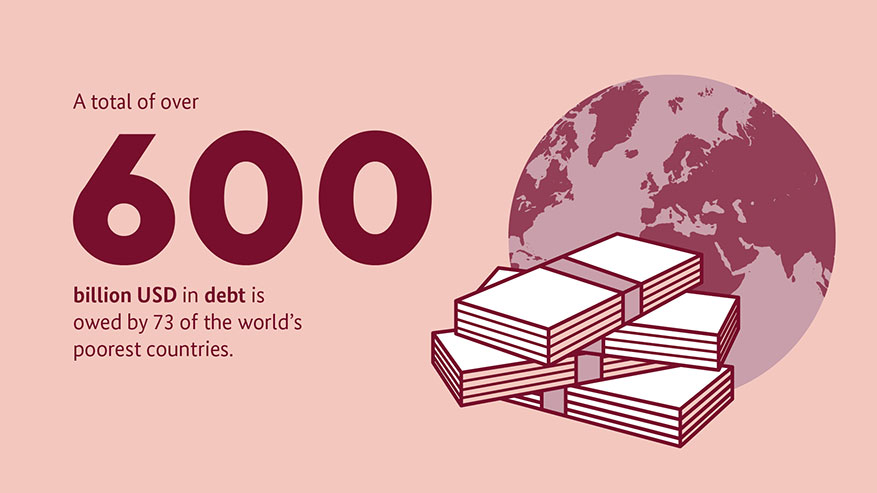 Total amount of debt owed by the world’s poorest countries 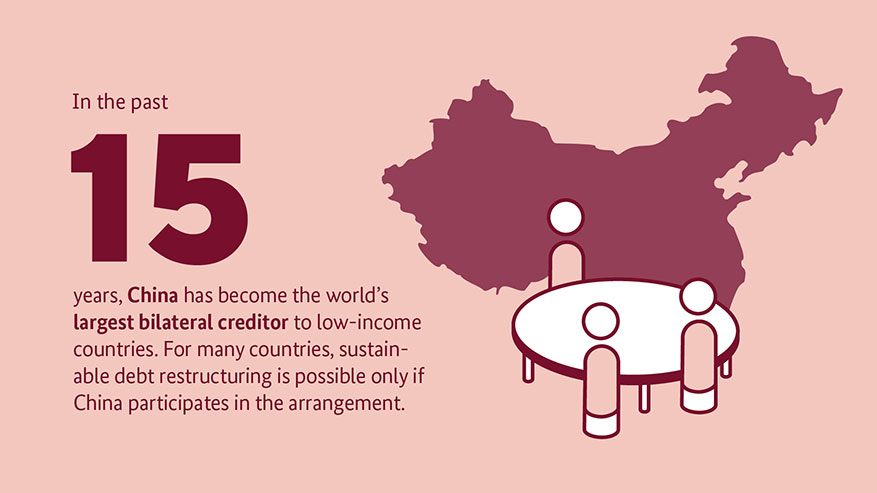 As a result, countries experiencing particularly severe financial difficulties may require debt restructuring in the coming months and years. In the past, debt restructuring arrangements have been negotiated mainly within the framework of the Paris Club – an informal association of 22 “traditional” creditor countries (mostly large and small western developed countries). In recent years, however, the structure of creditors lending to low-income countries has changed significantly: behind multinational development banks and the private sector, China is now the largest lender.

In order to ensure that the world’s poorest countries have access to efficient, coordinated and sustainable debt restructuring under these changing conditions, the G20 and the Paris Club established a “Common Framework for Debt Treatments” in November 2020. The Common Framework aims to provide customised, country-specific debt restructuring based on the following principles:

The Federal Ministry of Finance advocates a number of measures to help heavily indebted countries find a way out of their financial distress.

Furthermore, to facilitate and expand the dialogue between creditor and debtor countries, the Finance Ministry hosted an international conference that included finance ministers from selected African countries and major new creditor countries. The conference took place under the auspices of Germany’s G7 presidency and was held in October 2022 during the Annual Meetings of the IMF and World Bank.

On the international stage, a number of groups and institutions have been working at various levels to develop solutions for heavily indebted countries and to foster productive dialogue between creditor and debtor countries.

The G20 is the main forum for discussing international regulatory frameworks. This informal group of the world’s 19 leading developed and emerging economies, plus the European Union, was founded in 1999. Together, the G20 countries currently account for over 80% of global gross domestic product, three-quarters of world trade and roughly two-thirds of the world’s population. G20 meetings are regularly attended by representatives from other countries (such as Spain, which is a permanent guest) and international organisations (such as the IMF, the World Bank, the United Nations and the OECD).

The G20’s efforts made an essential contribution to stabilising national economies and financial markets in the aftermath of the global financial crisis in 2008–2009. Increasingly, the forum places a focus on intensifying forward-looking cooperation to prevent new crises, learning from experience, and making economies more resilient.

The G7 is an informal forum comprised of seven of the world’s leading economies – Canada, France, Germany, Italy, Japan, the United Kingdom and the United States – plus the European Union. It grew out of the first “world economic summit”, which was held in 1975. Russia joined the group in 1998, but its membership was suspended in 2014 after its annexation of Crimea.

G7 governments formulate joint positions on global policy issues when they meet for annual summits. Their talks focus on key issues such as the global economy, foreign and security policy, development, and climate action. Due to the G7’s informal structures, the rotating annual presidency plays a particularly important role, because the presidency not only organises the G7 meetings and summits in a given year but also sets the policy agenda. In addition to cooperating at the level of heads of state and government, the G7 also holds separate meetings attended by finance ministers and central bank governors. This is called the “Finance Track” (see below).

Finance Track
The Finance Track is a separate forum for cooperation within the G7 and G20 that brings together finance ministers and central bank governors to discuss international economic and fiscal policy as well as current challenges and long-term issues. The Finance Track’s work is based on the conviction that, given the growing interdependence of the world’s economies, key challenges must be tackled jointly and constructively in close cooperation.
Paris Club

The Paris Club was established in 1956 by a group of creditor countries with the aim of finding coordinated solutions to the payment difficulties experienced by debtor countries. Its membership basically overlaps with the membership of the OECD, and Germany is represented by the Federal Ministry of Finance.

The Paris Club deals only with bilateral debt that debtor countries owe to other government lenders. Debtor countries wishing to conclude a Paris Club rescheduling agreement must successfully implement an IMF adjustment programme. These programmes contain binding agreements on macroeconomic and fiscal policy frameworks as well as institutional changes designed to place the country’s economy on a sound footing.

The IMF’s creation was agreed at the United Nations Monetary and Financial Conference (also known as the Bretton Woods Conference) in July 1944. The IMF was then formally established in December 1945. Germany has been a member since August 1952. Any country that is willing to fulfil the IMF’s requirements in terms of monetary policy consultation and cooperation can join the organisation. The Federal Minister of Finance is Germany’s representative on the International Monetary and Financial Committee, which monitors the stability of the international monetary system and advises the IMF’s Board of Governors.

The IMF’s main objectives are to intensify global monetary policy cooperation, safeguard financial stability, facilitate international trade and boost employment and sustainable growth. The organisation’s primary task is to safeguard the stability of the international monetary system, the exchange rate regime and the international payment system, which together make it possible for individuals, companies and governments to do business with each other.

More on this topic